The Notre Dame Cathedral is one of the most notable monuments in Paris (and in all of Europe for that matter). This Catholic treasure is over 800 years old, ( 856 at the time of the fire on April 15, 2018). Located on a small island called the “Ile de la Cite” in the middle of the River Seine.

The building of the cathedral was completed over the course of 200 years; it was started in 1163 during the reign of King Louis VII and was completed in 1345.

As is the case with most notable historical monuments, The Notre Dame Cathedral Paris has its own share of both the glorious and the tragic historical moments that will forever remain indelible in the mind of people everywhere. Among them is the crowning of Henry VI of England right inside the cathedral in 1431.

The Cathedral was at one time in a stage of total disrepair and close to the point of being demolished, but was later saved by Napoleon who himself was crowned Emperor in 1804 inside the Cathedral.

After restoring the Cathedral back to its formal beauty and in the midst of World War II, it was rumored that the German soldiers might destroy the newly installed stained-glass. It was therefore removed and only reinstalled again after the war had ended. The steps were taken because of only one particular archaeological glass window called the “Rose Window” which is supposed to be the biggest glass window in the world produced in the 13th century.

Discussing the history of the Notre Dame Cathedral Paris would not be complete without discussing the most famous story of the peasant girl, Joan of Arc, who is well documented in the history books of France. She was very brave and claimed that she had visions from God. This poor girl had spiritual and character richness even though she had no material goods.

Through her visions and courage, she helped France in the battles against the English troops. While using the wise military tactics of Joan of Arc, the well-known heroine, France won many fights against England. She also was a great supporter of the monarchy; she is indirectly the reason why Charles VII was crowned. However, Joan of Arc was captured by the Burundians, accused of heresy, and tragically, she was burned at the stake. On the 7th of July 1456, Joan of Arc was declared innocent and a martyr. In 1909, she was beatified in the famous Notre Dame cathedral in Paris by Pope Pius X.

Notre Dame Cathedral which can also be called “Our Lady” was still in use today by the Roman Catholic Church for Sunday mass and it is the seat of the Archbishop of Paris.

A notable and distinct historical artifact that is very popular today is the famous bell that has been redesigned to ring automatically. Any visitor to the bell tower should be prepared to climb the 140 steps staircase, if desirous of seeing the historical bell or have a glimpse of the city of Paris.

Also, inside the Notre Dame Cathedral, among so many historical artifacts, is the notable 17th-century organ with all of its parts still functional. There are also drawings, plans, and engravings that showed the old and hidden mysteries of several of the church developments and how the city of Paris came into being.

The world-famous cathedral is referred to as Notre Dame de Paris (“Our Lady of Paris” in French), The Notre Dame Cathedral, or sometimes just simple “Notre Dame”.

Facts About The Cathedral’s Damage and Restoration:

In its history, Notre Dame has endured destruction and subsequent restoration in many periods. However, much of the facade and interior still are true to the original designs. In the 16th century, both the Huguenots and the French king vandalized and changed a lot of the cathedral’s contents. A lot of the features on the cathedral’s exterior were removed because they were considered to be idolatrous, and tombs and stained-glass windows were destroyed in the name of modernization. The cathedral was converted into a storage warehouse for food, during the French Revolution, and the heads of many of Notre Dame’s statues were removed.

Between 1845 and 1870, the first attempt at restoration took place. A good portion of the previous century’s damage done to the cathedral was repaired, and new additions were built. Most recently, a new restoration program was started in 1991 and has gone on for 20 years with a focus on cleaning up facades and sculptures.

The many organs which were installed over the years after Notre Dame’s construction are a centerpiece of the cathedral and themselves worthy of a visit. And the cathedral’s bells are also some of the most famous in all of Europe. Of the five large bells that can be seen at Notre Dame, the one that is located in the South Tower, known as the “Bourdon Bell Emmanuel”, is the most prominent. It weighs over 13 tons. The other four bells are located in the North Tower. The cathedral’s bells were traditionally rung by hand, in the 20th century, electric motors were installed.

The Notre Dame Cathedral is not just one of the greatest Paris monuments. It is above all a catholic church, which is to say, it is a place of Christian worship and fervor.

The cathedral is considered to be one of the finest examples of French Gothic architecture. The innovative use of the rib vault and flying buttress, the enormous and colorful rose windows, and the naturalism and abundance of its sculptural decoration all set it apart from earlier Romanesque architecture.

The cathedral was begun in 1160 and largely completed by 1260, though it was modified frequently in the following centuries. In the 1790s, Notre-Dame suffered desecration during the French Revolution when much of its religious imagery was damaged or destroyed. Soon after the publication of Victor Hugo’s novel The Hunchback of Notre Dame in 1831, popular interest in the building revived. A major restoration project supervised by, Eugène Viollet-le-Duc began in 1845 and continued for twenty-five years. Beginning in 1963, the facade of the cathedral was cleaned of centuries of soot and grime, returning it to its original color. Another campaign for cleaning and restoration was carried out from 1991–2000.

Visited by approximately 12 million people, yearly, it thus being the most visited monument in Paris. Relics believed to be a piece of the cross on which Jesus was crucified, as well as the Crown of Thorns he wore, have been kept at the cathedral for centuries. The braided circle held together by a golden thread has about 70 or so thorns attached. The relics were obtained from the Byzantine Empire in 1238 and brought to Paris by King Louis IX.

On 15 April 2019, the cathedral caught fire, suffering significant damage, including the collapse of the entire roof, the main spire and substantial damage to the rose windows. 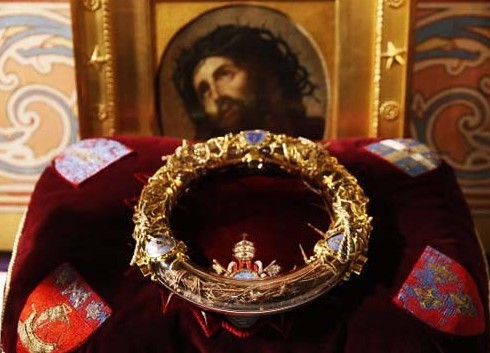 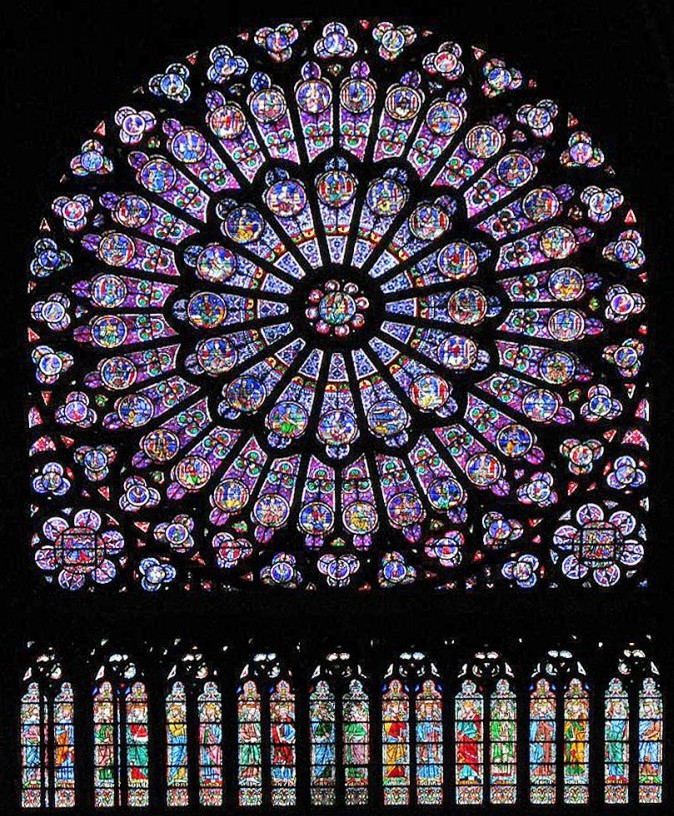 PARIS — The inferno that raged through Notre Dame Cathedral for more than 12 hours destroyed its spire and its roof but spared its twin medieval bell towers, and a frantic rescue effort saved the monument’s “most precious treasures,” including the relic revered as Jesus’ Crown of Thorns, officials said Tuesday.

Late Monday evening, the Paris Fire Brigade reported that they were able to save the cathedral’s stone structure, including the facade, the two, 226-foot twin bell towers, and the largest bell of the cathedral from the south tower. The North tower was completed in 1240, the South tower in 1250. Notre Dame is also famous for its trio of round stained-glass windows dating to the 13th century that sits over the three main portals. The Archbishop of Paris said that all three appear not to be damaged, according to CNN.

Thank you for visiting my page