What is a Himalayan Salt Lamp?

Himalayan salt is rock salt (halite) mined from the Punjab region of modern Pakistan. The salt often has a pinkish tint due to mineral impurities. It is primarily used as a food additive as table salt but is also used as a material for cooking and food presentation, decorative lamps, and spa treatments.

Please let it be known that :

There are no salt mines in the Himalayas. Pink rock salt is usually mined from Pakistan or Poland. “Himalayan” is just a descriptor because a “Punjabi Foothills salt lamp” doesn’t sound quite so exotic.

Pink Himalayan salt is a type of crystal rock salt harvested at the foot of the Himalayas in the Punjab region of Pakistan. Some people believe that pink Himalayan salt is one of the healthiest salts available because it contains more than 80 different trace minerals. Some people claim that pink salt is good for you and it’s healthier than table salt and sea salt. But that is a separate topic which I hope to discuss at a later time.

Their mission is to bring forth one of our planet’s most potent minerals… a mineral formed over many thousands of years ago when light and energy from the sun-dried up the primal ocean.

Reasons Why They Are Healthy:

Salt lamps are said to provide health benefits because they are “natural ionizers,” meaning they change the electrical charge of the circulating air. Ions are compounds that carry a charge because they have an unbalanced number of protons or electrons.

They are produced naturally in the air when alterations occur in the atmosphere. For example, waterfalls, waves, storms, natural radioactivity, and heat all produce air ions. They can also be created artificially by commercially produced air ionizers.

It’s suggested that Himalayan salt lamps may produce ions by attracting water particles that evaporate off as a salt solution when heated by the lamp, forming mostly negative ions.

How Does a Himalayan Salt Lamp Work?

We know the body needs salt for things like hydration, electrolyte balance, proper blood pressure regulation, and the nervous system.

Since water in the air can also hold allergens, pollutants, and even bacteria, these substances get attracted to the lamp too. The heated salt lamp supposedly dries out the water vapor, leaving the particles attached to the salt. For this reason, many sources recommend wiping down the salt lamp with a cloth a few times a week to clean it. Sometimes known as a negative ion generator.

Natural living proponents and other fans of Himalayan pink salt lamps, (HPS lamps) claim that the negative salt ions get released by heating the lamp through the use of a candle or a lamp that already has the light bulb inserted inside it. By inducing heat inside the lamp it causes a negative ion flow to the atmosphere. These negative ions attract dust so it’s not being breathed in plus several other nasty elements we may be breathing. Thus providing a clean oxygen source. In doing so it has been claimed to boost blood flow, improve sleep, increase levels of serotonin in the brain, and calm down allergy or asthma symptoms.

These negative ions are said to also neutralize electromagnetic radiation from household electronics, and even prevent the build-up of static electricity.

We are embedded in a vast sea of electromagnetic (EM) radiation emitted by our electronics (smartphone, computer, television, tablet, appliances, etc). Nobody knows for sure what the long term effects of EM exposure will be. What is known is that constant EM radiation exposure can cause chronic fatigue, increases stress levels, and decreases the body’s immune response, to name a few.

Negative ions will certainly cancel out positive ions; however, to counteract electromagnetic radiation entirely, you would need to wrap yourself in lead sheeting, not just light a lamp next to the TV.

It ionizes the room, by balancing artificial frequencies and unnatural electromagnetic wavelengths that originate from electronic appliances. I have a salt lamp burning next to my computer whenever I am working on it. Since using it, I do not have the headaches I once used to have on a regular basis. One in the living room and one in my bedroom.

Himalayan salt lamps produce the light waves of the rainbow spectrum which protect your body.

Significance of colors of the rainbow in modern philosophy:

We now have seven days of the week, seven liberal arts subjects, seven deadly sins, seven wonders of the world. I find that to be significant as related to the same colors produced by the Himalayan Salt Lamps.

People using salt lamps report improvement in their physical and mental well-being soon after starting to light them.

They are said to help with:

Mental and stress-related disorders (including insomnia)

Due to their calming colors (different shades of orange and pink), rock lamps have also been used in color therapy to help treat neurotic disorders and sleeplessness.

Improve the quality of air in their immediate environment.

Achieve a feeling of relaxation and meditation. This could be because it increases 5-HT metabolism.

The fact that special Himalayan pink salt inhalers exist, and that they seem to have tremendous beneficial effects on asthma, bronchitis, and other respiratory ailments rules in favor of the exotic salt.

Studies demonstrate that negative ions can definitely benefit people suffering from seasonal depression (SAD), and may help other forms of depression too. It needs to be pointed out that during the clinical trial ‘high-density negative ion exposure’ was applied. Interestingly, the ‘low density’ group also experienced a 17% improvement.

Claims that the lamps boost serotonin production are plausible but unproven; the only way to measure serotonin activity in the brain of a living human is by a painful and dangerous spinal tap, so scientific studies rarely look at that neurotransmitter directly. 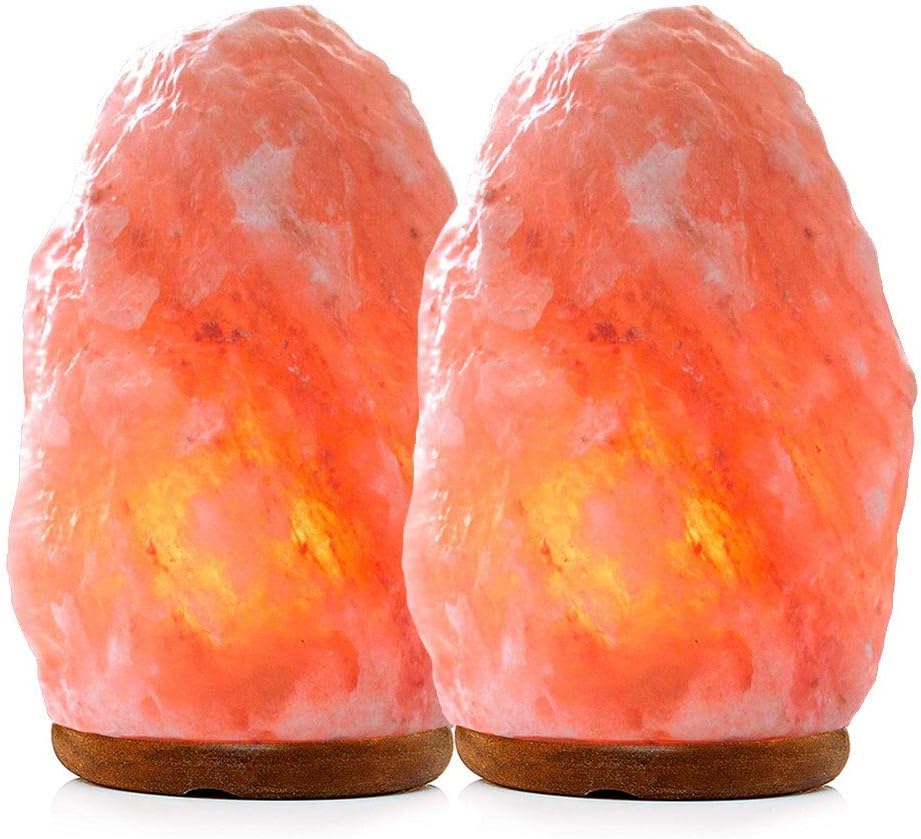 Where to Place Them:

Don’t expect massive improvements if you tuck away a single rock lamp in the far corner of your house where no-one ever goes. These lamps have a limited range. You will achieve the best results if you place them somewhere where you and your family spend a lot of time, or where there are a lot of electronic appliances.

It is suggested to have more than just one pink Himalayan rock salt lamp. You can start with one of course and then add it to your collection as you go along. The more the better. You should aim to have at least one in every room you frequently use, such as bedrooms and living rooms

I personally use three midsize HSL’s in my home. There is so much evidence that negative ions give us a better breathing environment. For instance, whenever I go outdoors and if I am lucky, to find a stream or lake, I feel relaxed. When leaving this area I begin to tense up, and my anxiety builds up.

For the price of a salt lamp, it sure is worth checking out. Just have one, have it as closes to you as safely as possible when you go to sleep, and when you know you are going to be on your computer for long periods of time, have one on your desk.

Some Information about Himalayan Salt and Salt Lamps:

Thank you for reading,

7 thoughts on “Benefits of The Himalayan Salt Lamps”